Akmuhammet Bayhanov has been subjected to a raft of human rights violations on account of his perceived opposition to the Turkmenistan State in 2003. He was banned from leaving the country for 5 years. After his house was demolished without providing any compensation by the Turkmen Government in 2013, Akmuhammet escaped from Turkmenistan and sought asylum in Turkey and Russia. However, he was not able to find a protection from regular intimidation and threats in both countries. He decided to flee to Germany.

On Wednesday the 21st of June 2017, Berlin opened its doors to thousands of musicians. Akmuhammet Bayhanov, being an incredibly talented one, showed us a little of his Turkmen folklore music at the event organized by Pangea House. After his performance, he shared some details about his instrument, his national dress and especially about his passion for music and the importance of it as he decided to emigrate.

Akmuhammet started learning music at the age of 12. He claims that he cannot live without music and that he always carries his instrument with him, even when he goes to nature. Before he goes to bed, he puts his instrument near his bed so when he suddenly wakes up in the middle of the night he can play or as soon as he wakes up.  When he decided to emigrate from Turkmenistan, he took two Dutara. His first destination was Turkey, where he says, his instrument helped him overcome the difficulties of immigration, as it is, to be far away from the people you love. “Music helped me survive,” says, as he smiles. He then, of course, carried his instrument to Berlin, where people were able to listen to it for the first time. 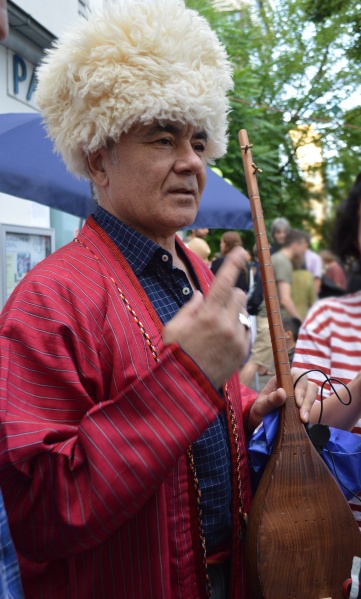 Dutara is a very old two string instrument. It may have been one of the first string instruments to be invented. Later on, people added more strings and that is how we now have guitars or violins, for example. While using a bow, someone realized that the strings produce a very particular sound. This person then, puts two strings together, as they sound much better. The instrument is made up of wood that comes from the mulberry tree.

Not during his presentation, but after, we had the opportunity to see Akmuhammet wearing a traditional dress from Turkmenistan. This type of dressing has been used since the 7th century and it’s composed by a tunic and a hat made of sheep wool. Back in Turkmenistan, when there is a special holiday, this kind of dressing is gifted to important guests.

Make a tax-deductible donation and keep the work going!

A study by @rsfinternational found hostility towards journalism is rising and threatening democracies worldwide. Press freedom is being threatened all over the world, from verbal harassment to unlawful arrests and even murder. We need our journalists, we support our journalists, and we want an end to the climate of hatred!
Tanggol Bayi, an association of women HRDs in the Philippines has strongly condemned the use of sexual violence against women in Duterte's drug war. Check our blog for the full story.
In 1998, we celebrated the adoption of the Declaration on Human Rights Defenders (HRD). 20 years later, we celebrate its creation, but continue to fight for the protection of HRDs worldwide. We must continue to support human rights and those who work hardest to uphold and defend them! #unitednations #humanrightsdefenders
Saudi Arabia is in the news for Jamal Khashoggi's murder, and is attempting to silence many more! #israaalghomgham #humanrightsdefenders #activism
Presenting Anvar Nurmuhamedov, practicing lawyer to protect human rights and freedoms. #HRM #HRDs
Presenting Saida Inoyatova, part of the league of women with disabilities. #HRM #HRDs
%d bloggers like this: